CascadiaPHP is an amazing conference in Portland, Oregon hosted at University Place Conference Center. I attended 2019's edition and it was full of great content and fantastic speakers.

This is the first in a three-part series about the conference.

I took the 10:30 AM Coho Ferry from Victoria, BC to Port Angeles, Washington, and then drove through the mountains and down the west coast of the Olympic Peninsula. Got some great photos along the way of Lake Crescent, Ruby Beach, and ... a rest stop on I-5. (Trust me, that shot was pretty cool for being a rest stop.)

The mountains were shrouded in clouds, the I-5 at sunset featured pink and orange skies and mist pouring over the highway from the nearby woods. It was kind of ethereal/otherworldly. Exactly what I love about the Pacific Northwest.

I arrived around 8pm Wednesday and got settled in for Thursday's activities.

Many folks contributed to the Twilio Hackathon for Good, and others had the option of attending a workshop for speakers.

I went for a hike in the morning and then attended the speakers workshop.

This workshop was all about helping both experienced and first-time speakers tune their slide decks and speaking presence for increased effectiveness.

Josh gave us great feedback and advice on techniques to use for presenting, and also ways to approach building a talk in general. It's not just about hopping into Keynote and magically having a perfect slide deck to spring into existence.

Before you start writing slides, you have to think about what you want the viewer to take away from the experience. He emphasized the point that most folks can only remember about 5 things, give or take 2 - so aim for 3 memorable takeaways from a talk.

I forget the other two things he talked about.

He covered ways of "owning the room" such that if something goes wrong, you can spring into action and get things sorted out ahead of time. Explore the room prior to speaking, so you can understand how the audience will see your slides, and what equipment is available to help you.

He suggested videoing yourself giving your talk and then watching it on fast-forward to highlight your stage presence and the message that sends to the viewer. "Wandering around like a lost puppy" is something he particularly cautioned against.

He also suggested strategies for emphasizing the content of your talk - for example, if you need to impress upon the audience the importance of a point, you can employ several techniques - you can get closer to them to increase the personal connection to the point you're making. Or you can have a strategic pause after making the point so that they can let it sink in. (Also, he didn't mention this, but don't literally say the words 'let that sink in'. That is over.) You can also add a blank slide to your deck to steer the audience's attention to what you're saying - but don't overdo it.

Another tip was that if you're going to show a video as part of your presentation, such as a demo of coding in lieu of the ego-fuelled disaster of a live coding sesssion that is doomed to fail, make sure that you sit and watch the video as well. This nonverbally informs the audience that their attention should be fully on the video.

And don't point at the screen or use a laser pointer. That might work when you're starting out, but as soon as you're being streamed or having your slides shown on multiple screens, a large subset of your audience will be unable to see what you're pointing at.

There was so much more content that I can hardly even begin to distill it all down, so make sure you check out his slide deck on his website.

That's all for Day One. Special thanks to Alena Holligan for organizing the conference & inviting me to the workshop, and to Josh Holmes for hosting the workshop.

Stay tuned for Day Two and Day Three, but in the meantime you can check out my road trip & conference photos on Flickr: 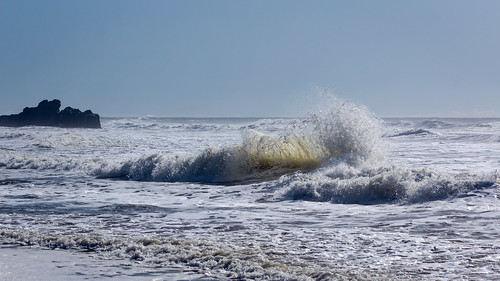